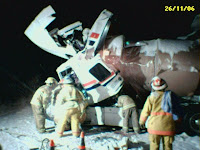 I went to Abbotsford last week to visit my dad for his birthday. Needed that. A lot. I thought I would cry like a baby when I saw him but honestly, he looks so much better and he's doing so well that all I could feel was happy. Maria and I went through some of the photos from the accident... 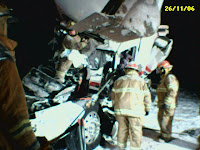 the woman who called it in stayed throughout and took some pictures with her phone.

As you can see from the last one, taken by Maria the following morning, there wasn't much left of the truck afterwards. At any rate, it was wonderful to see him, even if he does look like Frankenstein with the row of stitches running across his forehead - that scar will heal; many of the others already have.

I've started my new job at Merlin Edge - I work as an account executive now, putting together annual reports and such for our oil and gas clients. I love being in a self-motivated environment. Telus had some good people and the company tries quite hard to be a career path for its staff but the level of micromanagement they require just didn't make me happy. Now I micromanage; proofing and editing copy and layout. As my role expands in the next couple of months, I shall dramatically improve my skill set in publishing. A huge huge thing for me - I expect I'll be making books and other printed material of one kind or another for the rest of my life.

Meanwhile, I continue to try making friends of Jasmine and Shadow: the office cats.

In other news, Ash has been accepted into Concordia: one down, two to go (and two for me). An auspicious start. Hmmm....life in Montreal; heartbreaking prospect.

Now it's time for a rant. My topic today is Blogs and the apparent belief by web content providers that blogs constitute journalism. Get bent. When I go to my home page at Yahoo or Google or MSN, I expect properly researched articles written by people who have some kind of training or familiarity with the topics they write on. I do NOT think that news constitutes society gossip regarding Pickton, or the British Museum, or suicide bombers. A word to everyone who reads this: your opinion does not constitute news, journalism, or research. Your trite, poorly written, slang-ridden opine that Hilton and Moore should just, like, scrap it out has no fucking place as a cover story on my portal. My condemnation expands to include the pea-brained editorial staff who mistakenly believe I'm going to read that shit in that place. I come here for that, you dumb asses.

But don't feel bad, bloggers who think they're journalists...hearken to this little piece I found in the paper while visiting Abbotsford:

"Victoria kayaker's body found after search in canyon: It required nearly 24 hours, dozens of metres of rope, 14 rescuers and two devoted friends. But a search-and-rescue mission for a 36-year-old Victoria man still ended with a dead kayaker."

What a slap in the face to the friends and family of the man who died. The writer, Unnati Gandhi, in all his wry, cynical glory has dismissed this man as nothing more than meat, of interest only because of its packaging. He has ridiculed the efforts of the man's friends and the labours of the rescuers by saying they have no greater importance than rope. Post-modern sardonics have no place in this story: Mr Gandhi, you are not merely a bad writer, you are an asshole. Go to hell.

Darryl Janz once offered to pass me with a reasonable grade in Television Journalism at MRC on the condition that I never go into journalism. After all these years, I understand why. Until you know ,a little bit about suffering and humanity, you have no place reporting it to others. I took Darryl's advice and stayed out of journalism. I remain out and, given what passes for it these days, I wonder who else should have taken that course.

Take whatever you like from this blog. I don't call myself a journalist, even as I appropriate my father's experience as part of my online identity. That just makes me a blogger. I just wish others identified themselves a little more realistically.

PS, I really hate the way this fricking program randomly chooses what edits to accept. Nice interface. Enjoy the small text up top.