These are Dick Cheney's labs, Jackson and Dave. Jackson is black and Dave is white. Jackson is an evil overlord and Dave is the savior of the world. Jackson shares a name with a black political adversary while Dave shares his moniker with the king of Israel. 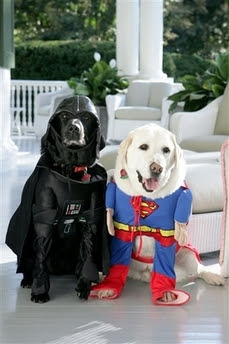 The white house released these photos, probably thinking they would be seen as a cute, humanizing picture of the life of the American President, Vice. Tastes rather like another shot from the good ol' boy to the 90% of the world he continues to oppress.