I have grave news for the writers, artists, movie-makers, and benevolent tyrants among us. The great one has arrived. His sense of humour is guaranteed, his prose inspiring and leavened by moral sensibility, his movies shall be superlative and his stewardship of North America and eventially the world will be mandated for the bettership of all. You can tell because he's from Halifax. Bask in the new leader. Go here. Now. He is destiny's hero. And a virgin.
Posted by Colin Martin at 4:32 p.m. 1 comment:

Just a quick note to let you know that the first batch of copies of In the Dark: Stories From the Supernatural has arrived and they look wonderful! 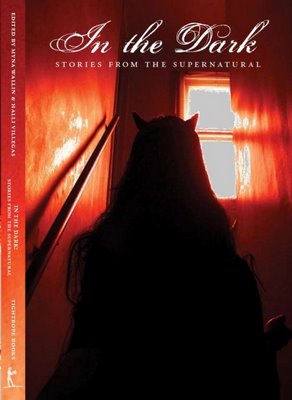 The anthology features, along with pieces from many other fantastic writers, an excerpt from my forthcoming novel Victor. Many of you at the NōD Magazine launch expressed interest in the book so here's how to get your hands on a copy:

2) You can order from the publisher, Tightrope Books or check out the list of Toronto booksellers currently carrying their titles here. This means tax but may be more convenient for those of you in the GMT area.

3) Copies of the book may also be purchased at Amazon.com The publishers don't make a lot of money this way but use whatever method of purchase is most convenient for you.

Feel free to spread the word to whomever you think would be interested in getting a copy of the book and I hope to hear back from lots and lots of you!

PS...Jason Christie's book of poetry, I Robot, has just been launched by Edge Books. It may be the best book of poetry you read this year. I highly recommend getting a copy.
Posted by Colin Martin at 1:15 p.m. No comments:

Last night I was Judas Iscariot. No, I didn't betray my beloved brother, though he was maddingly obtuse as usual. The role of betrayer fell to Simon the Zealot (beware of zealots) while my girlfriend, Simon Peter, wound up writing the Revelations. Perhaps not surprisingly, I became a revisionist evengelist.

The premise, sitting around a large goblet of wine at the last supper, is to enjoy a meal with Christ the soon-to-be redeemer. The conversation, punctuated by revelations, or "ripples in the wine" shapes the desitiny of the apostles and their beliefs, resulting in a reshaping of the western world as Christianity forms beneath our tongues. The game is still in the development phase and we participated as a beta group at the behest of one of the religious study professors at the U of C, who is planning to present its use as a pedagogical tool at a conference in November.

The game has a lot of potential as a tool to relearn and re-imagine the tenets of Christianity and their later codification and as an intriguing world-building game for intelligent people who need not actually have a comprehensive knowledge of Christianity or even Judeaism. It does need streamlining; Christ as GM is an "anti-GM", he is deliberately vague and deals in parable and metaphor unlike your standard GM whose role is to crystalize meaning and environment. This puts a great deal of pressure on the imagination of the players and I think their characters need traits: beginning the free debate over supper would start more easily if the players had a starting ground with their own characters.

One of the players suggested that the game be removed from the specific setting of Christ's last supper and made into a more generic leader-and-followers model that could be liberally applied to any religious fundament. From the perspective of development of this game for market consumption, that may be a good idea, perhaps even a necessary one...but I heartily appreciated the specific opportunity to grill Christ on just what the hell his beliefs were anyway. Having said that, I think the desire to tackle Jesus would have characterized our group anyway...different groups would play vastly different games. This could be an excellent activity for Church groups, Seminarians, religioun students, intelligent groupings of people from many of the dominant faith backgrounds...I'd love to see what a group of Moslems would do with it.

The mission cards that Christ assigns to his followers at the end of their participation in the revelations are a great touch. The PC gets to choose what either their (future, after the supper) history will be...or what will be their fate. Christ supplies whichever one the player doesn't. I.e., during gameplay I had a revelation that a man who could not die would wander the desert forever, preaching to the sand until he lost the ability to speak. My fate as I related it at the end of my game was to live a great life, become renowned throughout the world in my lifetime, and reviled centuries after my death. Christ (very ably played by the Professor's husband who also teaches religious studies) related my history thus: I was the revisionist evangelist. My preachings and gospels brought many to the church and spread Christianity like wildfire. Everywhere I went, I was greeted with the News of the Lord and the redemption of the people. And the News steadily bore less resemblance to my gospels and the faith took on meanings I never intended and my efforts to stamp my own personality on the body of Christ echoed throughout the congregation as others followed my example. I will never die. I will never be believed again, as my context has been forgotten.

I played a lot of "ego" and "immanence" cards during my gameplay, when crafting my revelations. As you can see, in the hands of a clever Jesus, this really came back to bite me in the ass. The game was marvellous. I would play it again when the beta for a commercial version comes down the pipeline and if any of you folks out there are interested, let me know and I'll pass the info back down the grapevine to the designer who would likely be delighted to have a dedicated group of test subjects.
Posted by Colin Martin at 11:01 a.m. No comments: