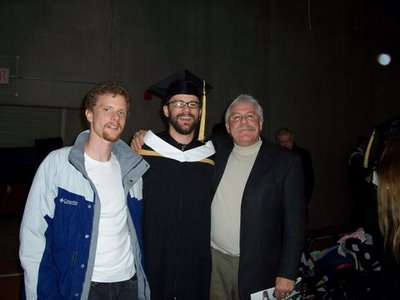 Ashleigh's dad took this pic of Graham, dad, and me at convocation, November 14/06. Ash and I got our BA's, Jeremy got his MA, Larissa her PhD, all super cool.

Dad could make it out because he has cashed out his RSP's and bought a couple of trucks: he's driving again for the first time in about 10 years. Or he was. On Sunday, driving through a blizzard on the Koke, another truck hit the brakes in front of him and he smashed into it. Three rolls of paper weighing 36 000 pounds went through the cab of his truck and deposited the upper half of it on top of the engine in the trailer of the other rig. Emergency crews took three and a half hours to cut him loose.

The impact snapped both of his legs, crushed his knees, and broke his pelvis in what they call a "suitcase fracture". He has two broken ribs and a broken cheekbone and he suffers a pretty thorough case of exposure.

No internal organs suffer damage. No major blood vessels burst - in fact, the doctors at the hospital in Merrit originally thought he just had a few bruises, despite the femur sticking out of his leg. After all, he kept walking on it.

The surgery in Kamloops on Monday to pin his leg and pelvic bones back together took six hours. The surgery on Wednesday to rebuild his knees took eight. The doctors say he'll make a full recovery and will likely be playing golf again next summer. When I spoke with him tonight he laughed and complained that the damage to his pelvis and soft tissue might hamper his love life a little for the next few months.

On November 14th my dad went out of his way to tell me how proud he is of me. Now, it's my turn. Who's the Ironman in this photo?

His name is Bill Martin. He's my dad and I'm damn proud of him. The thought of his broken body makes me shudder: fathers aren't supposed to break.

what a story -- cheers to an ironman, and hope for a speedy full recovery.

He's coming along really well and his spirits have never dropped. I'm amazed by the guy.

I'm so sorry to hear your dad got into an accident. How scary! Glad to hear he's doing well.

Your words brought tears Colin.. I'm glad you got to see Dad before his accident. I'm amazed by him too.

Yeah, I'm glad you got to see him as well. He got a really great trip in before the accident.