The Godfather is dead; long live the King.

When James Brown died on Christmas morning I was heartbroken. That heartbreak intensified when my brother called in tears that afternoon to tell me that my Christmas present was two tickets for us to see the Godfather of Soul on January 10th.

Against much misgiving, he returned the tickets to ticketmaster for a refund - they're likely in the pocket of some employee now and waiting for their highly inflated emergence on Ebay. But he did it, assuring me that he would find a way to come up with something as cool. 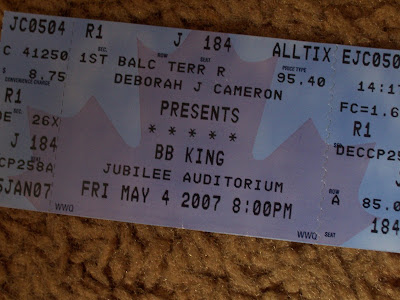 Boy, did he ever.

BB King still has it. He barely walks; he performs the show slouched into a rickety little chair and his band aren't much younger than he. But the music is relentless; the emotional rollercoaster exciting and loaded with thrills, not least of which are BB King's voice, which hasn't ebbed a moment in all these years of using it and of course, Lucille. He still plays her sweet.

Yes, he brought out the hits in a show that was designed as a conversation between BB and his fans. He also brought out the chops, repeatedly showcasing the "young men" in his band (I'd put their average age around 60). He waxed nostalgic about growing up in the cotton fields of the south during the age of segregation - "one one side of the tracks was us. on the other side, all of y'all. on the other side were two fountains. one said 'colored'. the other was labeled 'white'. at night, when i had a beer and a half in me, i would sneak across the tracks and drink some of that white water. funny, it didn't taste no different. didn't even look different"..."sometimes, in july or august, which were the truly hot time down in mississippi, i would be plowing the cotton with the mule, big ben. he was a good mule, very kindly, very considerate. on a really hot 'un, when the air wasn't stirring at all, he'd be so kind as to give me a little wind to cool me down. that's a good mule".

Lots of talk, lots of play and a whole lot of seated-down dancing that repeatedly brought home to the audience that this showman is a far cry from finished putting on the show.

Thank you Graham; the concert was absolutely awesome.
Posted by Colin Martin at 9:07 a.m.