rough notes from march 13/08 talk at concordia...my commentsandthoughts in italics

no mic, no shoes, no service. mike problems solved by using the mic rather than standing apart from it.

anthropology of estrangement, lives in roland barthes, the third meaning lives on in what we're to hear today - filtered by taussig sketch in his field notebook filled working in columbia, july 2000.

the sketch shows pictures of cars out of alignment with the ruled page and a picture of a woman stitching a man into what appears to be a sleeping bag. it appears to have been drawn by a child, though apparently filled in with no small effort using watercolour paints. 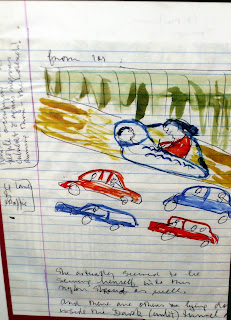 july, 2000 in Medellin, Columbia. people sleeping in traffic tunnel because it was warm in the tunnel (according to my driver). a woman sews a man into a white nylon bag in a world of four million homeless - an epidemic caused by paramilitary activity and cows. no man's land, they have no land - and in this country all want land because all want cattle. even the president is a noted cattleman who, like others of his class, owns paramilitary to drive people off the land, that they can avoid being taxed on their cattle.

nylon cocoon in freeway canyon, inches between the cars and the people. what moth will emerge? a movement of enclosure writ at many levels as "freedom" implies homeless, no place. how is meaning subverted through barthes? square it away and then refute your square, as he, a restless thinker, does.

stifling deadly enclosures as a safety. stillness on a freeway. criticism a failed enterprise from its beginning: gap between meaning and picture, we have a silly understanding of understanding. this a drawing from life, real, but he draws it, makes an image but we have a fuzzy understanding of how the pictures we leave in give meaning.

image and language take precedence. can reality out strip surreality? how strange is this normal? to be surreal is to go back and forth on this threshold between sleeping and waking. the region from which the surreal precision of poetry reports.

i see a young man waiting at an intersection. when the light goes red, he enters traffic, juggling flaming sticks with incredible skill. he circulates the intersection, juggling traffic with aplomb. animated, he juggles the sullen dummies in the cars - the tabla rasa for his surreal poetry, the way Breton's paris must have appeared when he juggled them also: as though an atom bomb has fallen in a fiery apparition amongst the sluggards. surreal is urban, through barthes' third meaning.

the third meaning is an interrogative meaning, living in film cells (stills) or panels from comic books. the drawing a reservoir of meaning. the french government attempted to return a preserved tattooed Maori head to new zealand for proper burial. but the minister of culture deems that the head may not leave france because it is a work of art and it is owned by france and is therefore french art and this man's head and thirty others of his brothers and sisters are artistic things belonging to the french people.

the head is not a body part. as french art, photos may no longer be taken of the head. drawings are permitted, as in a court room. in court, drawings - perhaps due to their temporal duration - fail to harm the living sacrifice the way photographic simulacra do.

does the drawing, in its stillness, enter the realm of the sacred? bataille suggests cave paintings came after the hunt - made in celebration of the deceased - rather than before the hunt as previously assumed. celebration of the living rather than supplication to the immaterial for success in killing. bataille opposes greed, insecurity, survival of the fittest in favour of a wasteful, celebratory general economy.

perhaps barthes' study of signs tells us nothing, merely intellectualizes the image and ignores its imagicity. the power of image imaginary. but not so imaginary as incredible and shocking. the image a way to absorb shock, to mediate: image magic and the need to mark coexist in the words (as in taussig's sketch, written before the sketch was made) i swear i saw this.

to swear is to stand outside truth in order to insure truth. Bush aides will not testify under oath in the scandal over illegal influence peddling in the american judiciary and the Gonzales placing. they refuse to swear. foul language that can hurt the object of the foul language if misdirected. to be under oath could mean to turn the direction of the curse upon one's self, if the truth were not adequately dispensed by oath-makers.

to witness is needed only when no court available: but to whom do you swear? trying to heal a 17 year old from sorcery, taussig sang as he had seen other healers sing: but he faltered, unable to conjure the spirits. he put in real people to his mind, he imaged those who could help him sing and his imaging was good. seeing cannot be separated from singing, touching, but they differ from speaking. he struggled to write (speak) in his field journal of this healing song - too many "you's" appeared in the audience. he refigures them as spirits and can write.

all writers (especially diarists) write to spirits. i swear i saw this (witness) summons spirits. this is sketchy and ridiculous, despite Writing and Witnessing. all in this room are potential shamans, of freeway and traffic tunnels in negative capability; that curious state of the mastery of non-mastery.

regarding Primo Levi: writing the experience of Auschwitz as a weekly factory report. a factory built while he worked as camp labour at Auschwitz. can you witness (critically) your own witnessing? Levi realizes he writes a bunch of literature. "may your house fall apart - the curse, by the witness feeling the shame the just man feels at another's crime. does this shame disqualify the witness? it was the witness who survived, despite being (often) the least worthy person:

"We who survived the Camps are not true witnesses [...] we are those who, through prevarication, skill or luck, never touched bottom. Those who have, and who have seen the face of the Gorgon, did not return, or returned wordless."

taussig, through Levi, disagrees that Auschwitz lies outside language. the weekly factory report provided in _if this is a man_ creates a magical armature.

the taussig drawing? does it have a sacred quality? stupendous normality is what triggers the stupendous abnormality. levi no game but that of benjamin's story teller. forsake narrative for the still shot. remove the image from its succession: that removal is what barthes calls filmic. time stands still and is radically reorganized. this tension compresses time into space. allegorical reasoning stacks in the image, still despite the time taken crafting image, reading image. this is the eye of the hurricane.

because children can see the other world, the spirit world, they are open to fright. to heal fright close the gap (length of fright) between those worlds and this. the result is a loss of fear and a conflation of the worlds. a third meaning.

Q - what do you gain making spirits of real people?

A - i started wondering what purpose field notebook drawings serve. does skill matter when drawing feels necessary? as anthropologists, we rely on truth of witnessing, i want to investigate that. as to why call it sacred and the implied demeaning of subjects this process could entail, i don't think it's romanticizing or exploitive but an adjunct or approach/tack to true witnessing. i swear i saw this invokes an external authority to underscore truth-telling and why wouldn't i include this?

there is no place in our urban language today for the human-spirit circuit except in metaphor of poetry, but in these other societies it is a triangle: spirits of living, dead, absent - that our language short circuits and thus stops meaning from working.

A - an essential part (with hallucinogens) without words to differ from speaking, making the song sounds (recordings with a curing fan as syncopated percussion, always shifting rhythms) different than speaking, it channels spiritual in so much of divinity throughout the world, even in contemporary pop songs. though i'm a great believer in language (i think it'll always get you there) this shadow of language can add a depth to the meaning of what you witness.

thinking is saturated with imagery.

talking is saturated with imagery.

but not really imaginary. drawings like this ask how picture-bound language is and how we take that for granted or how sometimes (Plato) we intensely fear it. this fear continues today, especially film and popular culture, when in conflict with 'real learning' - that is so suspect of what happens in an experiential environment.
Posted by Colin Martin at 1:55 p.m.